The Kauri wood in the bench seat came from  the  Roman Catholic Convent for the Sisters of Notre Dame Des Missions in Rangoria, Christchurch.   The convent was built in 1907 and was a Category II in the Historic Places Register but sadly, it was demolished in 2014, after the Canterbury earthquakes.

The History of the Roman Catholic Convent in Rangoria 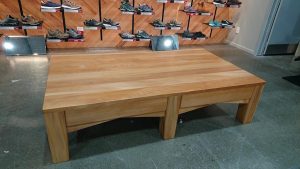 The building of the convent became possible because  three acres of land, near the Roman Catholic Church in Rangiora were donated to the church by  Sir Westbury Perceval.  A bazaar was then organised in order to raise funds for the convent.  The pastor of the district, the Rev Father Holland, and all the congregations in all parts of his wide district raised money successfully and quickly and the building work was soon  begun.  Building designs were provided by Mr Collins and Mr Harman of Christchurch.  At the cost of £2000, the convent was then  built by Wallet And Efford. 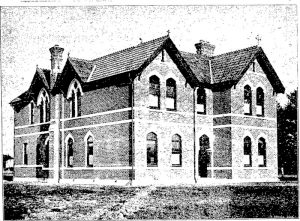 The new residence had visitor rooms, a music room,  a dining room,   a palour,  a kitchen, a washhouse,   a pantry,  two staircases,   a chapel,  a community room, several bedrooms and a tiled hallway.  There was also  a spacious glassed-in balcony which provided health care for the sick and convalescent nuns from other convents.

The roof was covered with French tiles and the building was plastered throughout and there was a huge amount of  interior woodwork. The windows were Gothic in style and  the chapel windows were coloured leadlights.  Hot and cold water were laid throughout  and there was an up-to-date    septic tank.  It was consecrated in March 3, 1917, by his Lordship Bishop Grimes in the presence of a large gathering.

The sisters who resided there gave their service in education.  Eventually, changes resulted in the sisters moving to a smaller, modern accommodation and the old convent became a private residence.